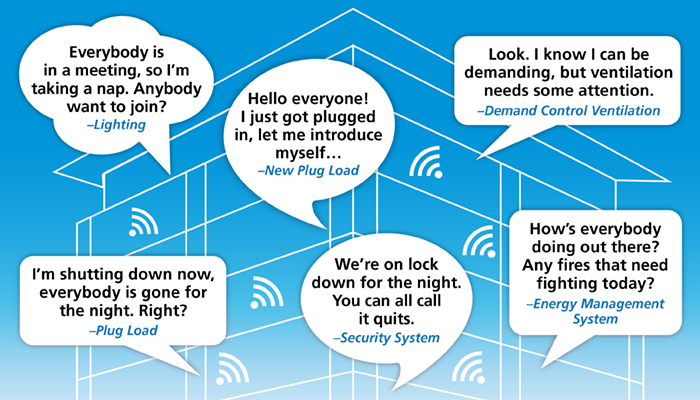 A couple of years ago, my team conducted a research project investigating how to reduce the energy use of office plug loads. Among the solutions we tested, one option was a power strip with an occupancy sensor. It shut off your monitors and other gadgets when you were away from your desk. Many buildings we investigated also had occupancy sensors controlling the lighting in the same office space. One of the offices we tested had yet a third occupancy sensor network – and CO2 sensors to control the HVAC system in some spaces. Three sets of sensors, three calibrations and tests, and three potential failure points! A noble effort for building performance by that owner…but at significant expense.

Wouldn’t it be easier if our building systems just spoke to each other?

A surprising difficulty in an age of smartphone apps that connect us, effortlessly, with many gadgets in our homes. Business owners are growing accustomed to different software and hardware products in their processes communicating with ease. On the facilities side of business operations, this type of communication is finally becoming a reality. Soon business owners will expect that their systems: HVAC, lighting, space utilization, security, plugged devices, and more, communicate. As we overcome the final barriers to this kind of communication, the systems that win market share will be those who lead this shift to integration.

Of course, integration has been a hot topic for years. In the 1990s, HVAC and lighting controls manufacturers began to design for integration. But it has taken until now to reach a tipping point for integration. We are beginning to see examples of typical high performance buildings (not just lab test beds) installing control systems that communicate intelligently with each other, without use of “dumb” electro-mechanical relays. For example:

These examples are now available from multiple vendors, after years of work on communication protocols like BACnet and the more open architecture of modern hardware and software (e.g. APIs). The push to get devices to talk to the internet – even simple tech like motors and small water pumps – has made them more able to talk to each other.

The building design, construction, and operations community needs to be prepared for this shift to integration. Luckily some companies have been integrating with others already, for reasons like sustainability and cost savings. But this integration needs to go broader, with even more interaction between humans in the mechanical, controls, electrical, and lighting trades, especially when it comes to the startup phase of the building. Finger pointing will be a natural outcome of this integration shift, as two systems that are supposed to talk with each other encounter problems. Building owners will demand that we all bypass the finger pointing via good communication with other trades. One useful step could be more interdisciplinary functional testing.

There is yet another actor entering our conversations: the IT manager. All this communication necessitates networks, and increasingly, cybersecurity. Lighting and other equipment can now be powered via ethernet cable and controlled via network switches. Integrating the IT manager early and often has never been more important.

This integration will save more energy and costs by allowing access to more devices and ensuring they are operating properly. More important to business owners, integration will come with the capability to access more of their facility operation with fewer interfaces, buttons, and software. For example, a CO2 sensor network that can easily plug into multiple operations platforms saves energy, but such a technology also allows checking on comfort and air quality via a simple app as opposed to complicated BAS (see companies like Comfy or Kaiterra). Integration will eventually proliferate - regardless of the price of electricity or presence of rebate programs.

How can you stay out in front of the shift?

As with any shift, there’ll be a competitive advantage to those who get out in front. 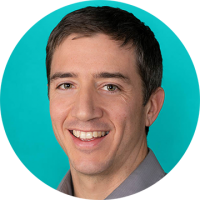 Director of Research and Innovation 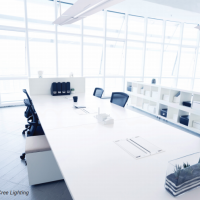 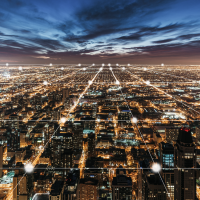 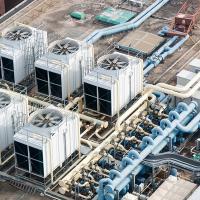 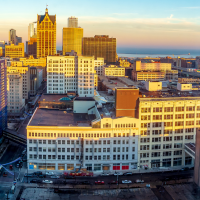 Be the Future of Buildings