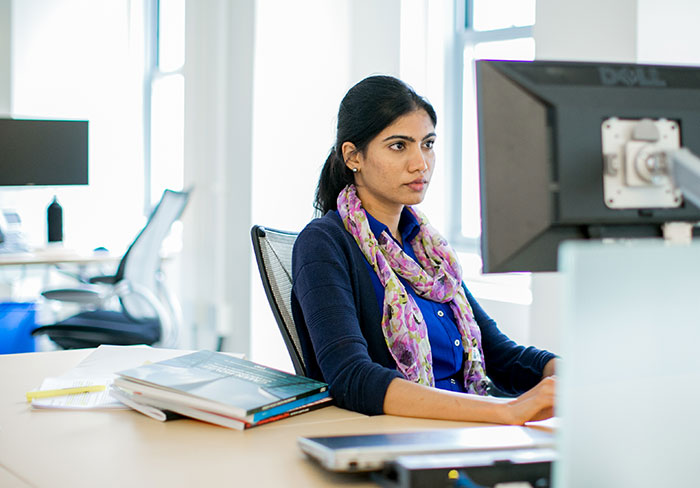 I think my work is very cool and I love it—well, mostly—because sometimes I think energy modeling needs the calmness of a Zen master and the strength of a matador!

Modeling predicts annual energy use of buildings before they are built. It computes peak loads, energy use intensities and energy split for different end uses, in intervals as short as five minutes. I use modeling results to help design buildings that will be energy efficient. Modeling is a complex process that never leads to a generic solution. (Have I made my case yet that energy modeling is very, very glam?)

Hailing from Chennai in eastern India, I now live in Chicago where cold climate buildings are my jam and my professional portfolio spans rebuilding low income communities in New Haven, Connecticut to performing energy analysis for high rises in Chicago and New York. With Chennai's urban habitat averaging 100 degrees F in the summer and with 57 degrees F as its lowest EVER recorded “winter” temperature (more than a century ago), the buildings in Chennai and Chicago are as different as an Asian elephant is from a polar bear.

Running after my hat

When I graduated from architecture college, I was a complete stranger to much of the vocabulary that now dominates my life. Energy models, high performance buildings, energy efficiency, climate resilience, what?!  A few semesters into architecture college, I realized that design didn't keep my soul singing. I needed more than abstract concepts for buildings: I needed reason, logic, facts and results.

Hoping that graduate school would lead to a world of possibilities, I set sail to a new land—or rather, boarded the Boeing from Chennai to Connecticut. The geographic transition was interesting in more ways than one—new culture, climate zone and work landscape. It's best described as “running after my own hat,” as G.K. Chesterton put it:

.. there is a current impression that it is unpleasant to have to run after one’s hat... not merely because it is running, and running exhausts one… there is an idea that it is humiliating to run after one’s hat; and when people say it is humiliating they mean that it is comic. It certainly is comic; but man is a very comic creature, and most of the things he does are comic—eating, for instance. And the most comic things of all are exactly the things that are most worth doing..."

Comical it certainly was, like the time I got on an elevator (or “lift” as we say in India), and pressed “1" to go the first floor. And why did the door never shut? Surely, the lift must have been broken! You see, the American first floor is the Anglo-Indian “ground floor.” Another comic instance: the time I asked a coworker to check the office daylight sensor with a “torch” and he let me know that if I didn't mean to burn down the building, I must use a “flashlight.”

As if navigating everyday life wasn't comical enough, there was the added process of getting acquainted with cold climate buildings, new codes and new building systems. Except for the one time I had traveled to the snowy Himalayas and stayed in a wooden shack heated by an electric filament heater, I did not know of heating systems. Nor did I know that walls had insulation! The word “humidity control” was almost never uttered in five long years of architecture college, despite functioning in a hot, humid coastal climate where ceiling fans + open windows = occupant comfort, and life is good.

In three years after arriving in the U.S., I had progressed from an “energy-uninitiated” architecture student to teaching energy modeling courses to mid-career professionals. In short, starting afresh had a very steep learning curve with very little support. I was very fortunate to have had amazing mentors, professors and peers who worked with such passion and commitment. Passion is very contagious, fueled by curiosity, never cured but absolutely worth catching.

Another hugely fortunate part of my journey has been the presence of many, many wonderful women. I went to school with 2,000 female students and teachers, and the only six men on campus were the school bus drivers. Academics, sports, arts and theater were all women territory and there was never a shadow of doubt in believing that you would be whatever you wanted to be.

My undergraduate and graduate classes both had a 3:1 female-to-male ratio (yes, that's correct!) and my first job was with an all-girl energy analyst team. I know I'm one of the lucky ones to have had the camaraderie and support. I wish all women professionals could have role models like I did. And speaking of role models, one of my fondest adolescent memories is studying for tests with my mother and a never-ending supply of hot Horlicks. I was studying for my high school board exams and my mother was working on her second Master’s degree while managing a job in banking and raising two kids. She played the true endurance sport with so much grace.

Interesting story I heard a while ago: when early man first discovered fire, the caveman and cavewoman decided that one of them should stay in the cave to watch the fire because if it died, they’d be at a loss to restart it. The cavewoman offered to stay, and thus began gender role stereotypes. The roles could just as easily have been reversed. Sure, the fire at home needs watching but that’s why we have advanced building systems with smart controls. And that’s also why I need to be in the workplace—to ensure Chicagoans live in high performance buildings and not in uninsulated caves with a burning fire! 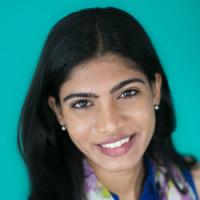